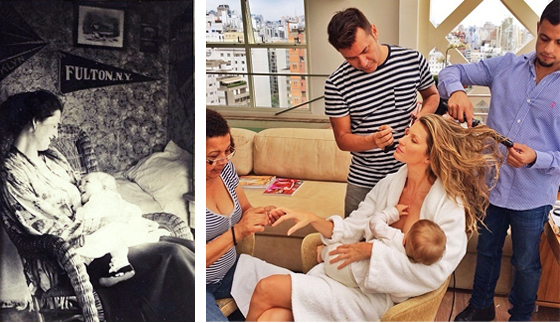 As a nursing mom, the article 25 Historical Images That Normalize Breastfeeding
resonated with me. The photos depict nursing mothers before breastfeeding in
public was considered scandalous, offensive or weird. None of the surrounding
folks scowled at the mothers and babies. No one gawked, pointed or ridiculed.
The mothers’ faces aren’t flushed with embarrassment or hidden in shame. The
moms weren’t judged as obtrusive or insolent. They were simply captured
feeding their hungry children.

I envy those moms.

How did the topic of breastfeeding become so divisive? Examples of this backward
thinking are easy to find. Gisele Bundchen’s breastfeeding photo instantly sparked
debate. She was judged by many for sharing a picture of her nursing her child at
work. She is a woman who makes her living being photographed, often posing
seductively and half nude. Yet she creates controversy with a breastfeeding picture.
The hypocrisy is glaringly obvious: She can flaunt her breasts to sell uncomfortable,
overpriced bras, but nourishing her child is outrageous.

;;;;;;;;
The recent story regarding Delta Airlines is more relatable to the average nursing mom.
A mother who asked about the airlines’ breastfeeding policy was told open nursing
was prohibited on their flights. The airline soon redacted their original statement and
apologized. But this is what it has come to? Nursing moms feel forced to ask if they
will be allowed to feed their babies. It’s almost as ridiculous as having to ask for per-
mission to breathe or pee. Also, is it in ANYONE’S best interest on the plane to have
a hungry, upset baby on board? Come on.

It is not just a concern on airplanes. Nursing moms face this dilemma in all public areas.
Mothers shouldn’t have to feel nervous or paranoid when their hungry child cries, and
they shouldn’t feel confined to their homes, or banished to uncomfortable places, in
order to nourish them.

Moms like Hollie McNish are fed up. She voiced the outrage of a generation of nursing
moms who have felt ostracized and confined to nursing in smelly bathrooms. It’s no
surprise her spoken word, Embarrassed, went viral and inspired mommies to denounce
the stigma.

Nursing in private is not always an option. I’m sure most moms would prefer to nurse
at home. I know I would. But motherhood is not equivalent to house arrest. Sometimes
we leave home. Our babies often come with us. When they feel hungry, we need to feed
them as much as they need to eat. There is a delicate balance of supply and demand.
Early breastfeeding requires frequent nursing. It is not in the best interest of the mother,
or the infant, to delay or skip feedings. Some babies refuse to nurse undercover. I don’t
blame them; I never eat in the dark under a blanket either. Some babies refuse to drink
from bottles. Some moms don’t retrieve milk from breast pumps. Therefore, bottles or
nursing covers are not always an option. Neither is starving a baby.

Breastfeeding can be difficult and added stress does not help. If a mom is nursing in
public, it is generally safe to assume the following: She is trying to be discreet. She
doesn’t seek to offend. She doesn’t want to be watched. She is only focused on caring
for her child. How can that offend anyone?